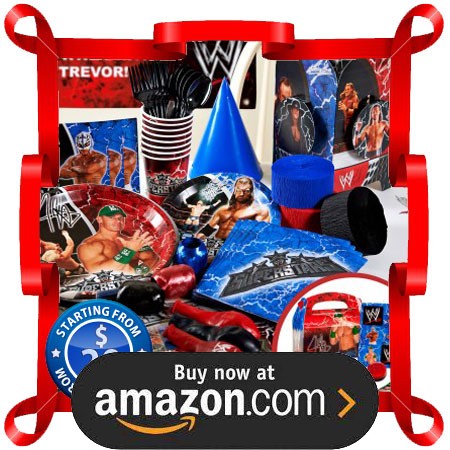 If you want to throw away a birthday party for your kid’s birthday, what’s better than using WWE Party Supplies? WWE is very popular among kids and this theme can make the party more colorful and entertaining for the children. The kids would just love WWE birthday party. To add more to the joy of your kid, WWE has party supplies that will make your kids birthday party worth remembering. WWE Party Supplies has a wide range of products. The WWE decorations will decorate your party with more color and meaning for your children. Because these birthday supplies are based on WWE theme, it also has many characters to choose from. WWE Birthday Party Supplies include invitation cards for the party. These WWE birthday invitations are themed according to the party and can be sent to your guests with the special message.

Now, arranging a WWE birthday party is fun. With WWE party supplies, you do not need to take stress while preparing for the party. Because WWE packs have everything from cups to napkins, from wall decals in retro color from the show to character costumes, all WWE themed, all that helping you to make your kids birthday party an enjoyable experience.

The idea of WWE is not just limited to costumes or props but it is more centered on music, games and confetti. You can add fun to your party by getting your kids and their guests involved in games based on WWE theme.

WWE birthday party supplies are not just limited to kids parties but they can be used for adult parties as well. You could celebrate your 30th or 50th birthday party with WWE party products. Even your graduation party would go well with WWE birthday supplies.

There is no party without a cake because kids love cakes and a well-decorated WWE cake will the mood of the party. WWE party packs include themed topper sets that will help you decorate your party cake with fun and color. You could also make cup cakes of various shapes and color based on WWE party theme that would bring that smile of joy on your kids face. Your guests would also enjoy WWE themed cupcakes.

WWE Party Supplies are all about Fun!

With WWE birthday theme party supplies, your party is always an instant hit. The best thing about WWE party is that it’s not only easy to decorate your party with them but it’s also fun. Many WWE pre-packaged party packs are available. Also available is WWE Deluxe Pack that contains a great collection of WWE Birthday Decorations. So, you don’t have to visit various stores to collect your WWE Party Decorations. And ultimately, you too can enjoy your WWE theme party along with the kids. WWE party supplies are easily available at online stores.

The Official Site of the WWE Universe